The Plückhahn Family originated in a Dutchy called Mecklenburg. A duchy is a territory, fief, or domain ruled by a duke or duchess. It was a small independent land that first appeared in the history books around 995 AD. Although it has be occupied by different empires, still retained its uniqueness. Today Mecklenburg is a state in Northern Germany.

All Plückhahn Families originated in a narrow corridor starting from Rostock in the north down to the border of Brandenburg to the south. Some family records can also be found in the Prignitz district of Brandenburg.
You may have guessed that our Families where either Farmers or Farm hands. They used to call Farm hands, land Laborers. Many of our family members are still farming today. Most families back then were peasant farmers who worked on land owned by wealthy landowners. 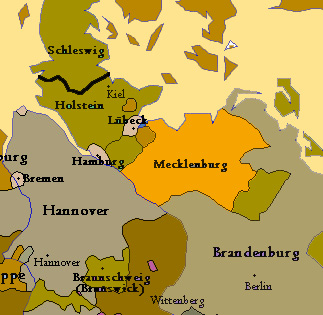 If you ever thought that a chicken was involved in our name you are right.
Our name is really 2 words put together.

So the meaning of our name, Plückhahn is “to pluck a chicken (Roster)” SO, if you have bone to pick with someone, you´re gifted with the best name for that task. We translate our name in German with the expression "ein Huehnchen zu rupfen haben"

Origin of our Name

I have heard different theories on the origin of our name.Below two stories family members have sent in.

Story One
The name could be derived from the profession of poultry dealer. Or it could mean a chef that participates in the slaughter and plucking of poultry.

Story Two
PLÜCKHAHN means to pluck a chicken, the verb "pluecken"is a Low German word from Mecklenburg which is translated into German as "rupfen", you see, Low German is sometimes quite near to English. SO, if you have bone to pick with someone, you´re gifted with the best name for that - we translate that in German with the expression "ein Huehnchen zu rupfen haben" and that means to pluck a chicken.

Story Three
There is a legend about the great hunt. These sporting events where on the great lands of Royalty. Hahn is a wild bird in Mecklenburg. The great hunter who was able to catch one first was honored with the plucking of the tail feather. And so they called him PLÜCKHAHN, the one who was entitled to take a feather. So our name came from an honored group of hunters

Spelling of our Name

The original Spelling was Plückhahn. Sometimes it is spelt using a "UE" instead of the umlaut "Ü",
when typing on an English only keyboard.

Over the years family membes have change the spelling. Here is a list of common spellings today

In the 1800’s life became hard. Plückhahn’s etched out a meager existence. Some family members did not survive the tough times. Under fed, many children died. Many decided to immigrate to greener pastures, namely the United States and Australia.